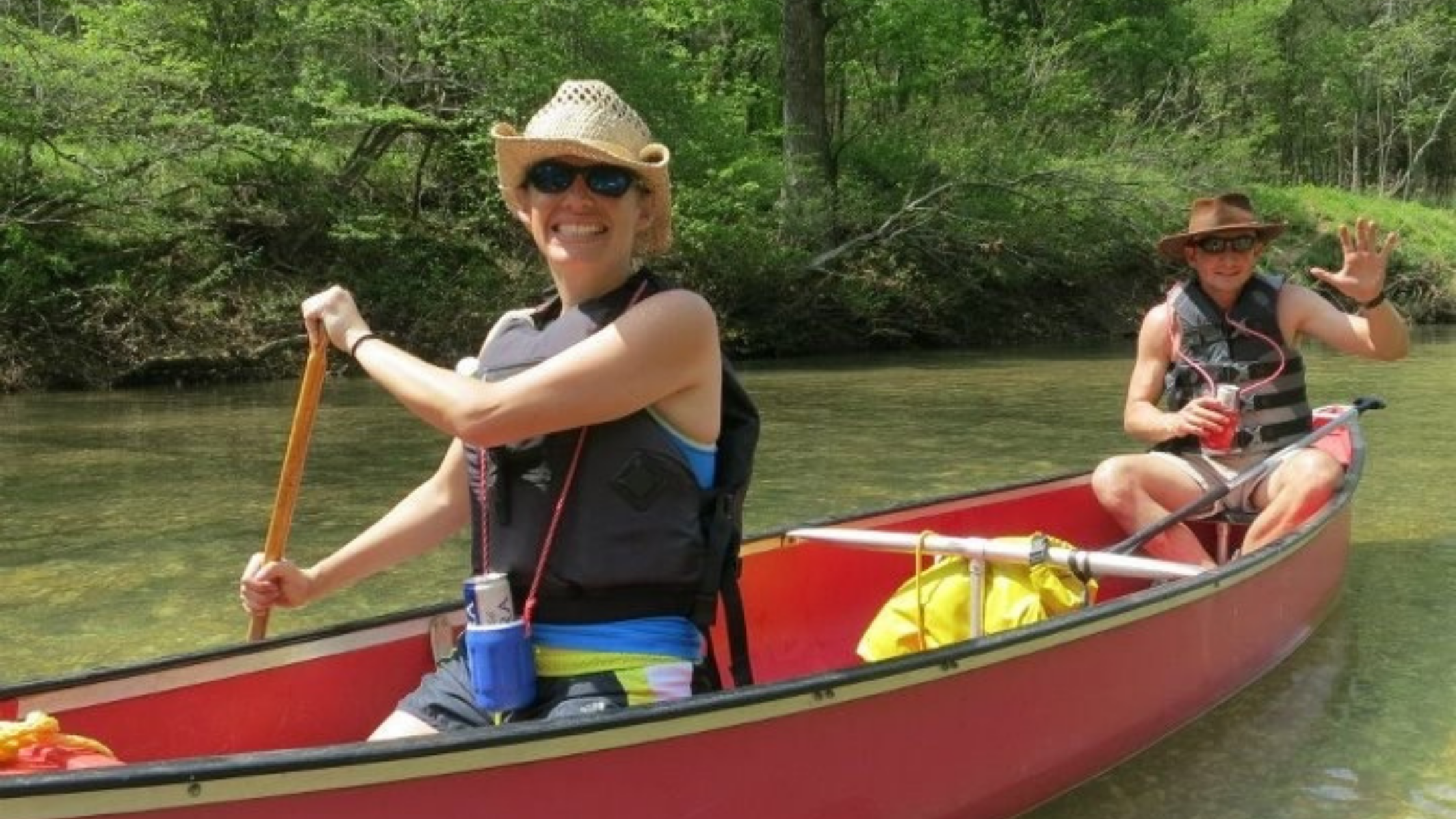 Going with the flow

I was 12 years old when my dad first signed me up for canoe school. That involved an intense weekend of whitewater paddling on the beautiful Mulberry River in northwest Arkansas. I began my instruction in a tandem beginner class paired up with the only other relatively young kid in the group. We were basically a disaster waiting to happen. Even combined, we did not possess much physical strength and I bet that we barely weighed 150 lbs total, even soaking wet. I was slightly older, outwardly more confident, and the heavier of us, so I was assigned to the rear of the canoe. Neither he nor I was thrilled with our pairing, but nonetheless, our education on the river ensued.

That weekend I learned many valuable lessons. For example, it is virtually impossible to paddle a canoe in a perfectly straight line so it’s not your partner’s fault when it doesn’t happen (despite what you might think). Balance is key and you have to learn how to work together as a team because both partners have crucial jobs that require being in sync. Most things that you think are your partner’s fault actually are not. Usually what ends up messing you up is the wind or the current of the river, or a sneaky rock hiding amid the rapids. Also, yelling at your partner because you are freaking out in a moment of crisis does NOT help your situation (and probably will make it worse).

I learned that you can’t control the river, but you can control how you react to it. And it’s always best to go with the flow.

All the most critical aspects of these lessons came to head the final day of canoe school. Students were required to pass a final test - successfully navigating our way around the raging Sacroiliac rapids. I was absolutely terrified. When it was our turn to go, it was pouring rain, I had zero faith in the kid I was paddling with, not much more in my own newly acquired skills, and my heart was pounding as loudly as the river was raging around us.

As we set off, the current yanking us forcefully along, my partner immediately dropped his paddle, clenched the sides of the boat, and started hollering. I leaned in, rain splattering my face, and paddled as hard as I could, determined to get us through by following the flow of the rapids. It was the most stressful and exhilarating event of my young life. As we rounded the last bend, I felt so immensely proud of us for making it through without capsizing.

Surprisingly, I have loved canoeing ever since and my early experiences on the river taught me many lasting life lessons. Ironically most of these lessons have proved to be valuable for my husband and me throughout our medical journey as well.

When I met Paul in 2008, I fell hard. I was working as a research coordinator at the university medical hospital at the time, taking nursing prerequisite classes in the evenings, and he was a first year medical student. He never played hard to get, but the demands of his medical training made me feel like he did! I had to learn to keep my own agenda, rather than sit around waiting for him to get done studying or out of clinicals.

Our dating motto became “go with the flow” which turned out to be pretty relevant in the throes of medical training. We didn't want to force the natural progression of things between us. Giving ourselves permission to let things unfold without resistance or trying to control the outcome was empowering in many ways.

Four years later, and four days after graduating from nursing school, I left my friends, family, and the security and comfort of home to follow Paul to Chicago for his medical residency. We weren't engaged yet, had no support there, and we were still navigating the early years of our medical relationship. Going with the flow through that transition became more challenging.

The following year we got married and discovered that this new level of commitment was harder than it looked on tv. We both worked long intense shifts in emergency rooms (never together), sometimes only passing like ships in the night. Tensions during this time of our lives were high and it was easy for situations to escalate between us. To top things off, we found ourselves struggling with infertility. So many pieces of our lives were out of our control. We argued, fell out of sync, and too often pushed each other away instead of standing together. But we dug in and pushed forward, determined to come out on the other side.

By the time he completed his training we’d had plenty of opportunities to practice going with the flow. We’d learned to work better in tandem.  Those early years helped foster our ability to survive, evolve, and persevere. All of the challenges we’ve faced together; medical school, residency, infertility and then pregnancy, early years of parenthood, chaotic schedules, intense shifts - when I look back, I feel so proud for how much we’ve survived and accomplished.

Occasionally we still encounter obstacles that surprise us along our path but we trust each other to navigate those things more efficiently as a team. We haven’t got it all figured out but we’re certainly more trusting of one another and we understand the value in working together. The important thing is to keep moving forward, giving each other (and yourself) grace when things get hard, and not too feeling guilty for occasionally yelling at your partner when you’re freaking out in moments of crisis.

Sometimes the things we learn in life come to apply later and serve us well in ways we never realize they would. It’s crazy how vividly I remember that weekend of canoe school experiences. All of those early lessons learned on the river are still so incredibly relevant. Finding balance, working together, releasing blame, remembering that life doesn’t follow a straight path - that you can’t control it, but you can control how you react to it. And most importantly - it’s always best to go with the flow. Just be sure to hold on to your paddle and always wear a life jacket.

Bio: Eliza B. is a life enthusiast • enduring optimist • story sharer • list-lover • former RN • power napper • married to a superhero (ER doctor) and spends her days as a SAHM working hard every day to raise kind humans • You can find Eliza via her website or on Instagram and Facebook.